Infection Control: When to Exclude Children from Daycare or School

Mild illness is common among children. Most children will not need to be excluded from school or their usual 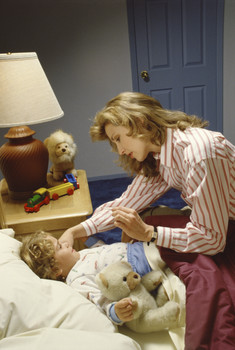 source of care for mild respiratory tract illnesses because transmission is likely to have occurred before symptoms developed in the child. Disease may occur as a result of contact with children who have no symptoms of infection. The risk of illness can be decreased by following appropriate hand washing procedures on a routine basis.

However, during the course of an identified outbreak of any communicable illness in a childcare setting or school, a child determined to be contributing to transmission of organisms causing the illness may be excluded. In general, the child may be readmitted when the risk of transmission is determined no longer to be present.

Children should be kept out of the childcare setting or school for the following:

Most minor illnesses do not constitute a reason for excluding a child from childcare. Examples of illnesses and conditions that do not necessitate exclusion include the following:

Asymptomatic children with mild loose stools usually do not need to be excluded, except when an infection with Shiga toxin-producing E. coli or with Shigella species has occurred in the child care program or school. Because these infections are transmitted easily and can be severe, exclusion is warranted until results of 2 stool cultures are negative for the organism.

School and Illness: Should Your Child Stay Home? (pdf)